I will lead with the fact that I understand WHY Lone Wolf has gone this way. This gets them Android devices, which is not insignificant in and of itself. The argument that it allows them to take HL forward to be more than just a character and statblock builder also makes sense.

That said, I’m not thrilled with the decision for Starfinder to be HLO only (at least at release). While it’s true that they won’t be able to do things like group starship combat with HLC, that shouldn’t keep them from releasing the features that it can support.

For this to work for me, Starfinder needs support for both HLO and HLC. Until it has both, I have no reason to subscribe.

It’s also not clear to me how or if they will accommodate those that purchased additional secondary licenses.

Additionally, it’s not clear if you will still be able to make use of custom user data files with HLO. If not, that’s gonna hurt for me, which encourages me to stick with HLC.

So… for now at least, I’m going to hold off on adoption until there is Starfinder support in HLC. Hopefully more of my questions will be answered by then.

It also means I am now less enthusiastic about running Starfinder, at least until it’s supported for both.

If you’re a Pathfinder GM and you’re only going to purchase one single third party product, my recommendation would be this book right here. 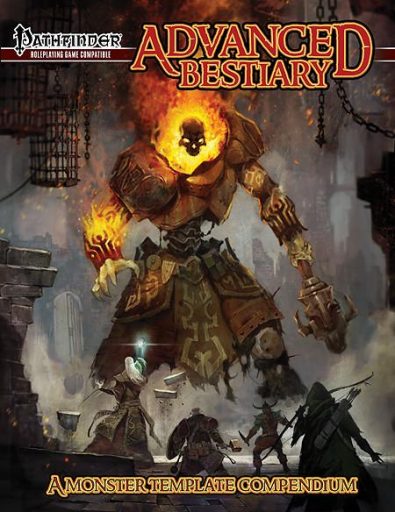 The Advanced Bestiary was originally released for D&D 3.0, and it was a good book but kind of got lost in the glut of 3.0 books that everyone was doing.

However, it was getting regular use by the folks at Paizo on their early D&D 3.x adventure paths. This and Tome of Horrors were a mainstay in section 15 of their OGL listing.

In a nutshell, the Advanced Bestiary is a book of monster templates. As a GM, I have found this invaluable… there are roughly 120 templates in the book. Multiply that by however many bestiaries you have, and well… 🙂