Generally, every year Bruce Harlick and Ken Hite do a seminar at Dundracon called “What’s Cool” where they basically discuss what’s new and cool in gaming. Last year, Ken made the comment that he feels that we’re in sort of a golden age of gaming at the moment. Between the cost of producing a game having come down to where  just about anyone can afford to publish, and because of marketplaces like DrivethruRPG, there is more being published, and more experimentation in the tabletop space than ever before.

Chatting with Mr. Hite over a scotch, I made the comment that I think this is also true of gaming tools, software, and technology as well…

I logged in to DrivethruRPG to purchase and download something, I believe it was a supplement for Stars Without Number. As I am completing my purchase, DTRPG informs me that they now have a Windows desktop client, in beta, and would I like to download and try it out. 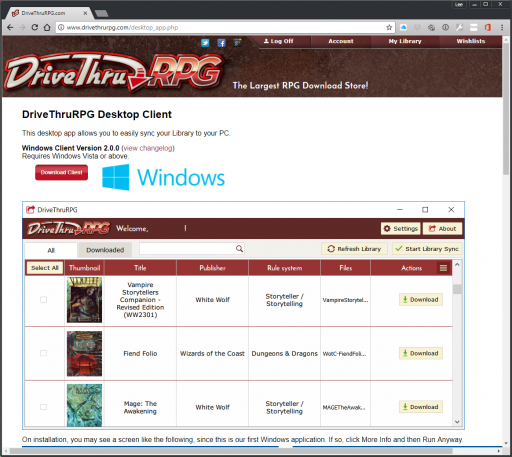 Five minutes later I have it installed and running… and very quickly realize that this very piece of software was damn close to everything I have ever wanted for gaming PDF management. See, it will download and sync your entire DTRPG library to a folder of your choice, organized by publisher, decompressed and with human readable filenames.

Maybe that doesn’t sound like a big deal to you, but I frequently back kickstarters and often take advantage of what Bundle of Holding has to offer. My DTRPG library is much like many peoples (including my own, to be fair) Steam library. I literally have thousands of PDFs, amassing about 28GB, just from DTRPG. It’s very easy to not know if you have actually downloaded a file, or where you put it, or whether it was updated by the publisher since it was downloaded.

This simple app solves all of this. I am not engaging in hyperbole when I say that this app makes me question buying gaming PDFs from any other source. It’s by no means perfect, but it’s SO much better than the previous status quo that I don’t want to go back.

“Hey Clyde, I thought you were talking about tools?”

Anyhow, after this epiphany, I remembered that conversation with Mr. Hite and I realized that yes, we are in a golden age of gaming tools development, and it’s not really being talked about. DTRPG’s desktop client, for example, has been available for some time. I had no idea…

So, I messaged Bruce and after confirming that he was NOT at Big Bad Con and then gave him a call and pitched a seminar for Dundracon on tools. He agreed that it’s a good idea and agreed to help me panel it. I’m still waiting to see if my proposal is accepted.

My thought is to try and cover, broadly, some of the really cool stuff that’s out there that perhaps not everyone is aware of, or just not that familiar with. I’d like to address virtual tabletops, character generation and mapping software, voice chat solutions for remote players, 3d printing, PDF library management, online communities, and even some meatspace tools like pocket white boards.

So, my question to those of you reading this, what would you want to see? What might I be forgetting, and what do I really need to check out? I will follow this up with a page that I can update with ideas over time.

Finally, if you are aware of someone local to the bay area that would be a good person to tap for this, by all means let me know.

Oh, and yes, I am totally tributing Kevin Kelly’s Cool Tools with this name…