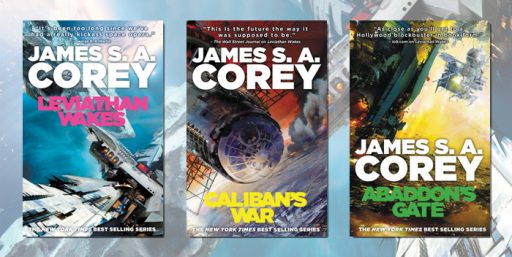 August 17, 2017—SEATTLE, WA: Green Ronin Publishing announced today that it has signed a licensing agreement with James S.A. Corey to adapt The Expanse series of novels as a tabletop roleplaying game.

“The Expanse is the most exciting thing to happen in science fiction in the last decade,” said Green Ronin President Chris Pramas. “It’s not just that they are cracking good stories—which of course, they are—but like all of the best science fiction they reflect the issues of today. We could not be more delighted to bring the Expanse to roleplaying games.”

“The Expanse began as a gaming concept nearly two decades ago, and was played as a home brewed RPG for years before becoming a book series,” said Ty Franck. “To have Green Ronin taking the universe of The Expanse back to its roots is very exciting. I’ve loved their game adaptations of other literary works, and I couldn’t be happier to be partnering with them on this project.”

“I came to the story first as a RPG, and clearly I had a great time with it,” added Daniel Abraham. “I’m delighted to have other gamers get the chance to make their own stories in this setting.”

Green Ronin Publishing is a Seattle based company dedicated to the art of great games. Since the year 2000 Green Ronin has established a reputation for quality and innovation that is second to none, publishing such roleplaying game hits as Blue Rose, A Song of Ice and Fire Roleplaying, and Mutants & Masterminds, and winning over 40 awards for excellence. For an unprecedented three years running Green Ronin won the prestigious Gen Con & EN World Award for Best Publisher.

James S.A. Corey is the pen name of Daniel Abraham and Ty Franck.

The Expanse book series is published in 30 countries and 27 languages, and has sold over a million books in North America alone. It has been adapted as a television show, now entering its 3rd season, and as a soon to be released board game. It has also been nominated for the Hugo Award twice, and won the Locus Award for best science fiction novel in 2014.